Warning: count(): Parameter must be an array or an object that implements Countable in /home/customer/www/dancamilli.com/public_html/wp-content/themes/fluida/cryout/prototypes.php on line 413
 The Magic Of Einstein’s Pipe – DanCamilli.com 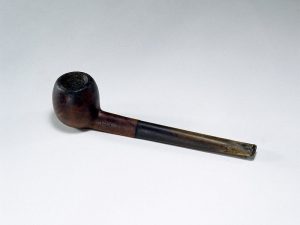 The Magic Of Einstein’s Pipe

I believe that pipe smoking contributes to a somewhat calm and objective judgement in all human affairs.”

There are over 137 million artifacts in the Smithsonian Collection yet one of the most popular and oft requested items is Einstein’s pipe which is presently on loan to Philadelphia’s National Museum of Jewish American History. According to Smithsonian officials, it is the most popular single exhibit in the extensive modern physics collection.

So what’s the attraction? Especially in this age of tobacco vilification! Einstein’s pipe is a simple, unremarkable, straight stemmed billiard (or apple) briar made by a less than re-known manufacturer prior to 1948. Although Einstein was photographed smoking many pipes, this is one of the very few we are aware of which still exists. So perhaps its rarity may explain some of its appeal.  It’s true that Einstein was not a very materialistic person and left us with little more than his pipe and his priceless papers. But there seems to be much more to the fascination than this.

In order to better understand the appeal, we might first examine the history and culture of pipe smoking. Pipe smoking has a venerable and distinguished past dating back to at least 3000 BC as referenced by one of Hinduism’s most significant deities, Shiva, who was said to be, amongst other things, god of chillum (pipe) smoking.

Tobacco smoking in a pipe was, of course, very common amongst the Native peoples of the Americas who employed the pipe for sacred ceremonies as well as socially. Legend has it that the White Buffalo Calf Maiden presented the sacred pipe to the Lakota (Sioux) people as a gift from Wakan Tanka, the Great Spirit. Tobacco was viewed by many tribes as a sacred herb to be smoked in a pipe for the purposes of prayer, healing, consummation of treaties and spiritual protection.

The pipe was viewed as a sacred object which possessed its own “spirit” and developed a special relationship with its owner and those who smoked it. Indeed, every seasoned pipe smoker can readily understand and appreciate the idea that pipes have a “personality” and over time develop a relationship with their owners. We confront this fact each time we go to our pipe rack and attempt to select a pipe that best fits our particular mood.

And what of this widely held view that pipe smoking enhances thinking and contemplation? There is solid scientific evidence that nicotine, like caffeine, actually does, increase the ability to focus but there is much more to it than that. Pipe smoking requires attention to detail as one packs, lights, tamps and tends to their pipe. Like many forms of meditation, it requires focus on the breath as one must puff gently and slowly in order to avoid over- heating the pipe and scorching the tongue. There is a ritual playing out of elemental opposites- the abstract and the concrete (a Yin-Yang) –  as attention shifts between following billows of ephemeral smoke heavenward and admiring the grain and gnarls of the briar bowl resonating warmth in the palm of your hand. This playing out of opposites encourages dialectical thinking as one can clearly see the interplay of polarities in their smoking process. This ability to see opposite poles may lead to a better understanding of nuances or “gray areas” and enhances the power of observation and circumspection.

The pipe’s symbiotic relationship with the smoker is deeply embedded in the archetypal consciousness of the Human race.  Over time, the pipe and the smoker become one and their “spirits” are inexorably intertwined energetically. The pipe smoker literally draws life-breath through the pipe. It is then a physical totem embodying and imbued with the memories, dreams, and reflections of the owner and this may explain, on the subconscious level, why so many non- smokers would be attracted to Einstein’s pipe; in order to share energetic space with the great thinker and to be in the presence of his energy in a more powerful way than that of examining, say, his toothbrush.

The discolored and well chewed stem on Einstein’s pipe may have been gnawed while studying wispy clouds of his favorite tobacco- appropriately named “Revelation” and contemplating the principles of relativity. The subconscious desire to somehow engage more deeply with this great thinker’s energy may help explain the popularity and magic of Einstein’s pipe.

Award winning philosophy/history teacher Dan Camilli, The Cosmic Duffer ™ ” is the former host of “Nature, Sport and the Spirit ” on natureschannel.fm radio and author of “Tee Ceremony: A Cosmic Duffer’s ™ Companion to the Ancient Game of Golf ” available at Amazon.  Visit dancamilli.com for columns, blogs, podcasts and more.