Warning: count(): Parameter must be an array or an object that implements Countable in /home/customer/www/dancamilli.com/public_html/wp-content/themes/fluida/cryout/prototypes.php on line 413
 Freedom: Seeking A New Narrative – DanCamilli.com 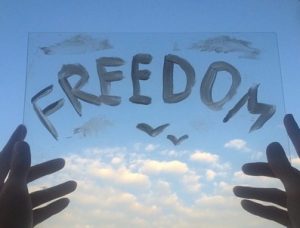 “We tell ourselves stories in order to live”

But, as with so much political- speak, the reality is considerably more complex.  When it comes to defining freedom, philosopher John Rawls put it best when he observed that; “Where you stand depends on where you sit.”   In other words, where you sit in the socio-economic food chain largely determines where you stand on issues and even informs your very definition of freedom.

For generations, there have been two conflicting definitions of freedom; one held largely by the wealthy, and the other envisioned by the 99 percent who make up the working class.  They can generally be categorized as “Freedom To” and “Freedom From”.

“Underlying most arguments against the Free Market is a lack of belief in freedom itself.”     Milton Friedman

By and large, the wealthy, ruling class has adopted a “Freedom To” definition of freedom as they have over time, successfully conflated capitalism with a form of government. In their world view, freedom belongs to the capitalist and the wealthy but not to the worker. The wealthy envision a definition which frees them from government regulations, labor laws and taxation; permitting them “Freedom To” pay workers what they please and treat them as they will while having license to exploit the planet as they see fit.

In sharp contrast, working people most often envision a “Freedom From” the many perils of capitalism itself. They define freedom as a living wage, accessible healthcare, affordable education and housing, and a pension in old age, as well as “Freedom From” corporate environmental exploitation such as the hazards of oil pipelines, fracking, air pollution and the like.

Throughout our history there have been a few notable, visionary presidents who were able to change the cultural narrative, redefine freedom and reset our sense of national purpose.

One such extraordinary leader was Abraham Lincoln. With the Gettysburg Address (1863), delivered in the midst of the Civil War, he deftly shifted the freedom narrative from the Constitution to the Declaration of Independence. Moving away from the Constitution’s “Freedom To” model of the privileged, slave holding plantation class founding fathers (think Electoral College!) and toward a precept from the Declaration of Independence. Lincoln said, “Four score and seven years ago our fathers brought forth on this continent a new nation, conceived in Liberty, and dedicated to the proposition that all men are created equal.”    (Underlining mine)

With this momentous speech, Lincoln brilliantly changed the popular narrative of freedom and redefined our national purpose. We were, from that point forward, fighting the Civil War in defense of the principle that “all men are created equal”. An assertion with which a Declaration of Independence author, Thomas Jefferson, would hardly concur since he owned nearly two hundred slaves when penning it.

Franklin D. Roosevelt was another such narrative- shifting president.

“True individual freedom cannot exist without economic security and independence. People who are hungry and out of a job are the stuff of which dictatorships are made.”

Another paradigm drama (an event which brings to the fore inherent possibilities) was the Great Depression of the 1930’s, which led to a new freedom narrative when President Franklin D. Roosevelt changed the definition of freedom from the ravages of “dog eat dog” unregulated capitalism to the New Deal. When generations of laissez faire Robber Baron greed and  exploitation led to the deepest economic crash in American history, Roosevelt, in 1932, assured a distressed and frightened nation that the “Only thing we have to fear is fear itself.” He then set about dramatically changing the role of the federal government from that of corporate rubber stamp to active regulator of banks and businesses and provider of social programs which would insure workers of “Freedom From” the ravages of predatory capitalism with programs and policies such as Social Security, Minimum Wage, Unemployment Insurance, Worker’s Compensation and the G.I. Bill. FDR transformed the purpose of the federal government to that of social safety net provider and defender of working people and the most vulnerable. He was rewarded for his efforts to provide people “Freedom From” the perils of rapacious capitalism with an unprecedented election to four terms as President.

Transformative leaders who successfully change the nation’s freedom narrative share similar characteristics and conditions. First, they seem to need a national crisis in order to convince the public to take a chance on change; Lincoln had the Civil War and FDR had the Great Depression to set the stage for a narrative shift; a new national story. And they do not allow their stated vision to get too far ahead of the pack.

“It’s a wise man who knows the Seasons.”  Lao Tzu

Great leaders seem to have a sixth sense when determining whether the public is ready for a dramatic narrative shift. In the 1960’s, John F. Kennedy, a young, charismatic, telegenic president for the new TV Age, presided over “Camelot” and boldly announced the creation of the Peace Corps and “our” decision to go to the moon which inspired a generation of idealistic Americans.

However, when proposing a new narrative, the price of bad timing has proven very costly, indeed. For example, Jimmy Carter was well ahead of his time on the issues of alternative energy and conservation. But in the late 1970’s, the public was not having any of Carter’s sweater-wearing, turn down your thermostat, alternative energy narrative.

The backlash to Carter’s poor timing was the election of Ronald Reagan. The price of advancing a new narrative before its time was dramatically demonstrated by President Reagan who, soundly defeated Carter in the Election of 1980, and promptly removed Carter’s solar panels from the White House roof. Thus further delaying for decades the nation’s crucial adoption of a sustainable energy narrative and recognition of the dangers of dirty fossil fuels.

So a crisis plus a visionary leader with a sixth sense for the nation’s zeitgeist appear essential to any successful narrative shifts. Freedom’s next narrative will likely build upon and extend previous versions just as FDR’s New Deal programs sought to make real Lincoln’s “All men are created equal” vision. A modern freedom narrative would likely feature inclusivity, economic, social and political justice and address our collective relationship to the planet itself- extending far beyond previous references to culture and nation.  We certainly appear primed for the obligatory stage- setting crisis as we witness the dawn of the Trump Administration and the accession of one of the most plutocratic and vastly inexperienced cabinets in U.S. History. We can only hope that our next freedom narrative doesn’t yet again become, as Janis Joplin famously sang, “…just another word for nothing left to lose.”

Award winning philosophy, history and humanities teacher Dan Camilli, “The Cosmic Duffer ™ “, is the former host of “Nature, Sport and the Spirit” on natureschannel.fm and the author of the “funny yet thought-provoking” golf-philosophy book, “Tee Ceremony: A Cosmic Duffer’s™ Companion to the Ancient Game of Golf” available at Amazon. Visit dancamilli.com for blogs, columns, podcasts and more.